The documentary Fiddler: A Miracle of Miracles argues that 1964’s Broadway sensation, Fiddler on the Roof, is more than just a musical. It suggests that, by following three sisters who chose their own husbands rather than accepting their father’s choices, it’s a feminist play well ahead of its time.

Max Lewcowicz’s documentary argues that the father and main character, Tevye, is an unusually complex character to carry a Broadway musical. The play deals with issues rarely found in that extremely light form of entertainment (the only exception I can think of is West Side Story). How many musicals close their first act with a pogrom (if you don’t know the word, look it up). Or a father singing goodbye to a daughter he knows he will never see again.

To emphasize the complexity of the characters and story, Lewcowicz’s documentary shows us clips from some very different productions. Aside from the English language productions and the 1971 feature film, we see the story and songs in Yiddish, Thai, and Japanese (with English subtitles, of course). Some old television clips and rehearsal videos show members of the original cast.

The clips from the Asian productions make a point: This play isn’t just for Jews, or even white Americans. One of the earliest productions was at a New York City public school, with a primarily black and Puerto Rican cast. I’m sad to say that many New York Jews found the concept distasteful.

According to the documentary, this story of marriages, poverty, and rebellion is universal. In one story told in the documentary, a Japanese woman asked how Americans could understand such a Japanese story. Lin-Manuel Miranda tells and shows us a performance of the song To Life at his wedding. This was before Hamilton made him famous, and people watching it on YouTube assumed that this Puerto Rican celebration was a Jewish wedding. 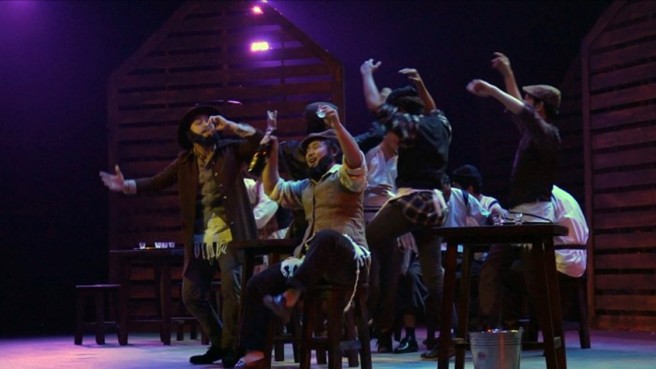 Of course, Fiddler tells us how the musical came to be. We learn how Joseph Stein shaped Shalom Aleichem’s Tevye stories into a single play, and how Jerry Bock and Sheldon Harnick created the songs. The original Tevye, Zero Mostel, hated director/choreographer Jerome Robbins for political reasons (Mostel was blacklisted; Robbins named names). The first out-of-town tryouts were a disaster, but Robbins whipped the show into shape.

Lewcowicz found a way to make Fiddler on the Roof important today. At the end of the play, the characters become refugees. The story connects with our country and how we’re treating our 21st-century immigrants.

But for the most part, Fiddler: A Miracle of Miracles made me want to see a stage production of Fiddler on the Roof. I’d also like to revisit the movie, and maybe buy the album.

Fiddler: A Miracle of Miracles will open Friday, at the Clay and the Shattuck.

One thought on “The Miracle of the Fiddler on Broadway & Elsewhere”