With almost full freedom, Chaplin was able to take considerable time to get his vision on film. According to Peter Ackroyd’s biography, Charlie Chaplin, “he spent three weeks on filming one scene alone, in which he kicks his rival while whirling around with a partner on the dance floor.” With that sort of perfectionism, it wasn’t possible to keep up Mutual’s one-movie-a-month schedule. The company just had to wait.

As I go farther into this chronological survey of films directed by Charlie Chaplin, I 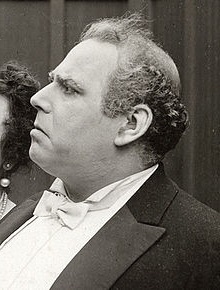 need to introduce you to Henry Bergman. This stocky and rather bland actor, who joined the team at the beginning of the Mutuals, would appear in almost every Chaplin silent film from here on in, often playing more than one role per film. I can’t recall ever being amazed by his performance, but I doubt if any other actor stayed with Chaplin as long. He also worked behind the scenes as an assistant director.

Around this time, Chaplin’s romantic relationship with leading lady Edna Purviance came to an end. But their professional and artistic relationship would last for several more years and films.

I watched the following four comedies off the Chaplin’s Mutual Comedies Blu-ray set. 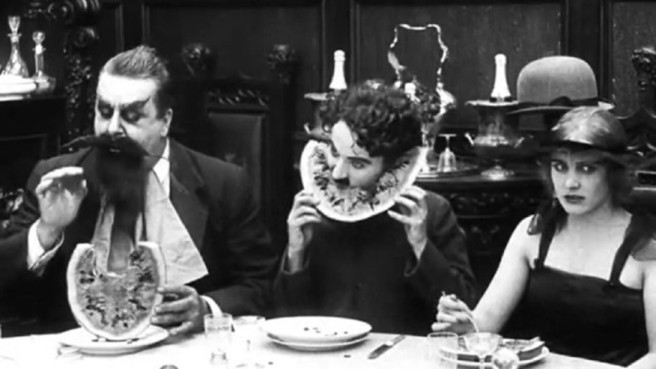 As in A Jitney Elopement, lower-class Charlie pretends to be a high-borne and wealthy aristocrat. But this movie is clearly an improvement.

After being fired as a tailor’s apprentice, Charlie breaks into a high society dinner party pretending to be the visiting count that the wealthy hosts are hoping will marry their daughter (Purviance). But Charlie’s former boss (Eric Campbell, of course) also pretends to be the count. The movie has a lot of good gags and a short but impressive interior chase.

Someday, someone will write a thesis on what I call work comedies. These are near-plotless slapstick comedies set in a place of work. The protagonist has a low-wage menial or service job, and makes a mess out of everything. Chaplin made quite a few of these. So did his Keystone co-star, Fatty Arbuckle. Laurel and Hardy brought the format into the sound era, and in the 1960s, Jerry Lewis extended the concept to feature-length.

The Pawnshop is the best work comedy I’ve seen, and the funniest movie Chaplin made up until this time. The gags, of which almost all of them land, come one right after another. A sequence with a ladder, which must have been extremely dangerous to shoot, amazes in ways more expected from the not-yet-famous Keaton and Lloyd.

Chaplin’s ability to turn one object into something else hit its zenith with the alarm clock sequence. While examining the clock to see if it’s worth buying, Charlie treats it as, among other things, a medical patient, a can of food, and bugs crawling on the table. He also examines the clock by using a telephone mouthpiece as a jeweler’s magnifying glass.

As he did in His New Job, Chaplin uses the movie studio itself to mine gags. Charlie is an assistant prop man (yes, it’s another work comedy), and Campbell, of course, is his boss. The evil boss spends most of his time sleeping in a chair, while Charlie does all the work, which includes carrying some nine chairs and a piano, and shampooing a bear-skin rug. But whenever the boss’s boss comes by, Campbell is standing up and Charlie is sleeping. Guess who gets the beatings.

But you couldn’t really call Behind the Screen a plea for workers’ rights. The stagehands go on strike for the silliest of reasons, and they become the real villains, ready to blow up the studio for their purposes.

Meanwhile, Edna dresses up as a man in a scheme to become an actress. Charlie discovers her gender and flirts with her. Campbell sees them kiss, and his reaction to the assumed homosexual relationship is one of his best moments on film. 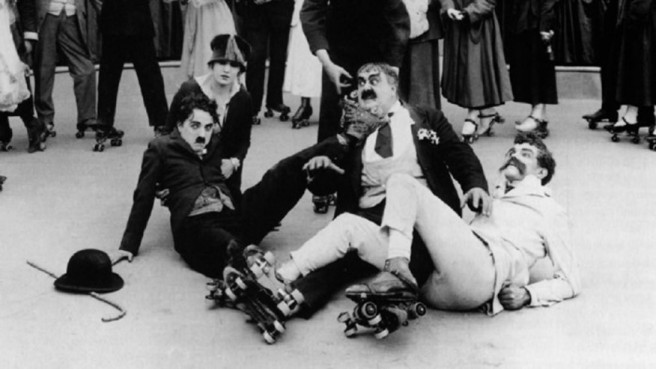 There’s an awful lot of story here for a two reeler, especially when you consider that the film is largely an excuse to put Charlie on roller skates. But any excuse to get Charlie Chaplin on roller skates is worth the time. His falls, near falls, fights, and chases – all done with wheels on his shoes – are both thrilling and hilarious at the same time.

The movie starts as a work comedy, with Charlie an incompetent waiter. At one point, he manages to serve a customer a live cat. And once again, lower-class Charlie pretends to be a nobleman.

In some ways, The Rink is a mess. But it’s a very funny and entertaining mess.