A bureaucrat, emotionally dead and cut-off from both his job and his family, discovers that he has only months to live. He has scarce time to make his empty life meaningful. He will find that meaning in Akira Kurosawa’s 1952 masterpiece, Ikiru.

The name translates into English as To Live.

When I started this project of revisiting my all-time favorite films–my A+ list of personal classics–I thought I would quickly skip over Ikiru on the grounds that I discussed it previously in a Kurosawa Diary entry. But then Criterion announced the Blu-ray, just as Ikiru came up on the alphabetical list. Sometimes, the timing works.

For a film to make my A+ list, it must be the perfect embodiment of its genre or, better yet, stand beyond genre. It must be at least 20 years old (so I know that it’s stood the test of time), and I personally must of have known and loved the film for years–preferably decades.

Consider American films about dying of cancer. In The Bucket List, the main characters go skydiving, fly over the North Pole, and eat in a gourmet French restaurant. In Breaking Bad, the hero makes and deals drugs to pay for treatment and help his family. But in Kurasawa’s moral universe, the dying protagonist finds redemption by fighting city hall and getting a park built in a slum.

What’s more, Kurosawa found a unique and original way to structure the story that keeps it from getting preachy or maudlin.

Warning: What you’re about to read has mild spoilers. I don’t think they will ruin your first screening of Ikiru. But if you’re worried, skip down to the First Impression section below.

In what was probably the best role of his career, Takashi Shimura plays Watanabe, the city hall bureaucrat who almost accidentally discovers he has an advanced case of stomach cancer. He stops going to work. A widower, he discovers he can’t make any significant contact with his son and daughter-in-law, even though they live with him.

He tries wine, women, and song; they don’t help. He befriends a former co-worker–a young woman bursting with life. Their friendship is platonic, but his family assumes otherwise. He’s happy when he’s around her, but eventually she pushes him away.

Before his diagnosis, he led a department where everyone pretended to be busy but never did anything meaningful. Now he takes on a crusade: He will get the city to drain an germ-infested sump and replace it with a park.

And just when the story is about to become sentimental, Kurosawa jumps ahead five months and the narrator tells us that Watanabe is dead. (Ikiru uses narration sparingly, but brilliantly. This is the only drama I’ve ever seen where a voice-of-God narrator sounds sarcastic.) In the extended wake scene that follows, the hero’s family and co-workers piece together at least part of what he never told them.

After Toshiro Mifune, Takashi Shimura was the most important actor in Kurosawa’s career. Primarily a character actor, Shimura rarely got starring roles. But he carries this picture beautifully, and you feel his presence even in the wake sequence, where you see him only in flashbacks.

For a film about death, Ikiru can be surprisingly lively. A jazz nightclub scene gives you a taste of Kurosawa’s love for American popular music. Jokes abound, many around the “rakish” hat he acquires in his night of partying.

Aside from the jazz, music plays some important roles here. Twice in the film, Shimura sings a touchingly sad song (Shimura acted in musicals before his Kurosawa years). And the story’s major turning point happens in a restaurant where young people in the background sing “Happy Birthday.”

Class differences play an important part in Ikiru. Look closely, and you’ll see a society where your birth defines your life in often cruel ways.

Few films are as perfect as Ikiru. 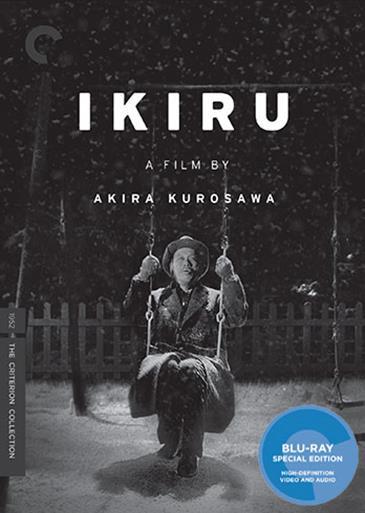 The Ikiru Blu-ray comes in a standard Criterion case. The cover shows the famous still of Shimura sitting on a swing on a snowy night. Inside, along with the disc, is a printed foldout with two articles: Donald Richie’s “To Live” and Pico Iver’s “Ikiru Many Autumns Later.” The foldout also contains credits for the film and disc, and Criterion’s traditional “About the Transfer” page.

If you own Richie’s classic book, The Films of Akira Kurosawa, you already own the first article on the foldout.

When you inset the disc, the home screen shows a close-up of a very scared Takashi Shimura. There’s no sound. The menu follows Criterion design, with the options on the right.

The only language options are English subtitles–On (default) or Off.

As with all Criterion Blu-rays, when you insert the disc a second time, you’ll get an option to go back to where you left off. Selecting No will bring you to the home screen.

The 4K scan was taken from a fine-grain master positive–the original camera negative is either lost or destroyed. Criterion presents this scan in 1080p AVC.

For the most part, it looks excellent. Ikiru is not a pretty movie, but the details–stacks of papers, peeling wallpaper–play an important role in creating the atmosphere of post-war Tokyo and of useless bureaucracy.

Unfortunately, some of the source material was beyond repair (or beyond Criterion’s budget). Occasionally the image was marred by what appeared to be uneven exposure, with part of the screen bleached out..

The uncompressed LPCM 1.0 24-bit, 24-bit mono soundtrack did its job. In some of the music scenes, you could hear the early 1950s technology struggling to capture the notes.

But I suspect this is how it sounded when Kurosawa signed off on the mix. I have no complaints.

The suppliments are identical to those on the 2003 two-disc DVD release.