Written and directed by James Vanderbilt

As the 2004 presidential election came to its climax, CBS’ 60 Minutes news program covered a story that should have ruined George W. Bush’s chance of re-election. But an important piece of evidence turned out to be fake, turning it into a scandal about the press attacking the president, giving Bush the boost he needed for re-election. It also destroyed several careers, including that of the biggest and most respected news anchor of the time, Dan Rather.

Writer/director James Vanderbilt uses this story to give us a slick, entertaining, and educational movie about TV journalism in the early 21st century. The picture is well-made, but unexceptional. It has one very big casting flaw. But it tells a story that we should all know and remember.

That story is told through the eyes of Rather’s producer, Mary Mapes, played by Cate Blanchett. And as we’ve come to expect, Blanchett is wonderful. Whether she’s struggling, enjoying her very satisfying work, or throwing biting sarcasm, she hits every note perfectly. I don’t know what the real Mary Mapes looks like, and I don’t care. Cate Blanchett looks and acts absolutely right for the Mary Mapes of this movie.

The film indulges in some very heavy sentimentality on the evening of Rather’s last broadcast. After he signs out and the broadcast is over, the movie actually switches to slow motion as his loyal staff cheers him on and the music swells.

Despite such silly touches, the film sticks reasonably close to the original facts–at least as I remember them. Mapes led a team to research rumors that Bush had shirked his Vietnam-era military duty. Using family connections, the future president got into the Texas National Guard to avoid going into actual combat–all the while publically supporting the war. But a lot of evidence, arguably incidental, suggested that Bush shirked even that light responsibility; he even went AWOL for months and was never punished for it. Keep in mind that Republicans were building Bush up as a war hero, while attacking the military record of his opponent, John Kerry, who had actually served in combat and was awarded several medals.

While researching these allegations, Mape found what appeared to be the smoking gun: two memos from Bush’s superior, complaining about his behavior. Almost immediately after the report was aired, evidence turned up proving that the memos were forged. Bush’s behavior ceased being the story and everyone was attacking CBS. To this day, we don’t know who forged those memos. 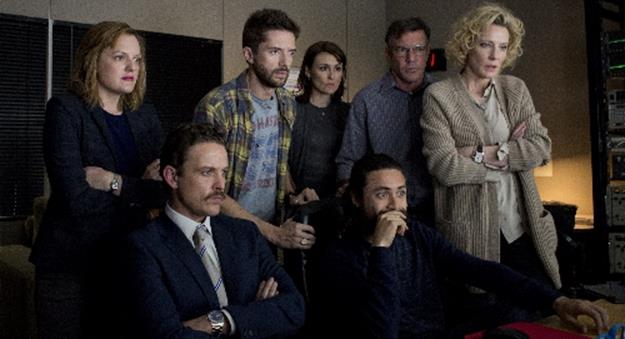 The last section of the film has Mape trying to justify her work to a panel of lawyers that behave like a kangaroo court. She has to make a choice between justifying her actions and holding onto her job. The movie clearly wants us to hope that she’ll succeed in both.

But here’s the problem: Although I am in complete agreement with Mape’s politics, and I believe that Bush’s behavior should have been an issue, I can’t help feeling that both Mapes and Rather should have been fired for this error. They put out a big story based on very faulty evidence. They didn’t know where their source got the memos. They only had copies, which made it impossible to test their age. The text was in a proportional font–possible but very unlikely for a typed memo before the computer age.

The film catches the look of 2004 very well, and it’s amazing how much things have changed in the last 11 years. The computers in this film all have CRT monitors, and most of the TVs are 4×3 standard definition. A few people have wide-screen TVs, and they’re all set wrong–cropping or spreading the old-shaped image to fit the new-shaped TV. Most people with widescreen TVs back then didn’t know how to set them up properly.

Truth reminds us of an important part of recent history, shows how network TV worked in the recent past, and does it all entertainingly. Despite some serious flaws, it’s well worth catching.

One thought on “Truth tells the story of a disastrous hoax”