Frank (Frank Langella) prides himself on his mastery of his chosen profession. He’s a cat burglar. But he’s an aging one, and dementia is setting in. It’s destroyed his career and is pretty much destroying his life. He doesn’t shop for food regularly. His home is a pigsty. He can’t take care of himself.

If Robot & Frank was set in the present day, his adult children would either hire live-in 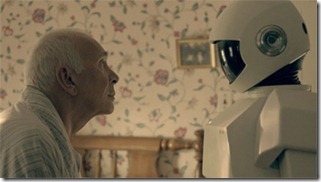 help or put him in a home. But because it’s set in the near future, his concerned son brings him a robot programmed to help people in his condition. Frank is mortified.

You know what’s going to happen. Of course Frank will warm to the robot (whom he refuses to name). They’ll become best buds, there will be a crisis, and everything will be resolved.

to a large degree, that’s exactly what happens, but Frank’s profession adds a mildly interesting wrinkle. No one taught the robot about keeping his charge from breaking the law (which I found extremely unlikely). Since it is programmed to encourage Frank to find stimulating activities, the robot becomes Frank’s partner in crime.

The robot has some interesting edges. Although Frank anthropomorphizes the machine, and the film encourages us to do so, the robot itself insists that is not human and has no real emotions. That was a nice touch.

On the other hand, the robot’s anthropomorphic design didn’t  convince me. This machine lacked the agility needed for all the cooking and cleaning it does, not to mention breaking into buildings and picking locks.

Another thing about the robot: I don’t know if this was intentional, but Peter Sarsgaard’s voice as said android sounded a bit like 2001′s HAL. It was a different voice and a different accent, but the cadence is was similar. It really hit me every time he said the name “Frank.”

On a positive note, the filmmakers successfully create a believable near future. Everyone carries what appear to be transparent smartphones. And a librarian played by Susan Sarandon drives an old, beat-up Prius.

In the end, this is a moderately entertaining picture without anything real to say. The plot has a few surprises, but the only really big one left me thinking “Oh common, now! You don’t expect me to believe that?” You won’t hate this movie, but it’s not worth going out of your way to see.